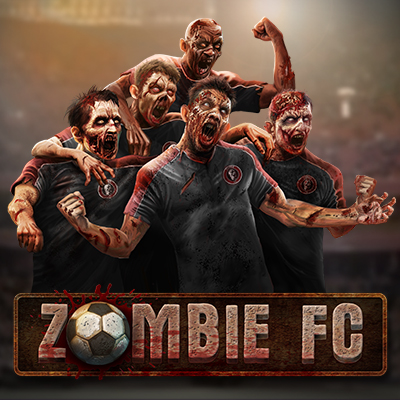 If you are a fan of zombies, horror, and terrifying themes, then the Zombie FC slot by Qora Game is the perfect destination for you to hit next. This is an online casino slot that you cannot give a miss, with some of the most significant prizes atop a chilling gameplay.The game continues to follow the traditional format of 3-rows and 5-reels, but there are no fixed paylines. Instead, there are 243 ways to win. Highly rewarding features like regular Wilds, expanding Wilds, tumbling reels, and free spins make the gameplay more exciting than its already intriguing visuals, with a fully packed stadium and rows of lofty buildings fading into the horizon for the backdrop. At the fore are enthusiastic zombies all set to participate in the upcoming football match.
These zombies form the highest paying symbols on the reels, and appear as players, coaches, referees and even fans. There are also other medium to low-paying football jerseys with numbers from 7 to 10. Apart from these regular symbols, special symbols like the Football Wild, Zombie Player Expanding Wild and the Bloody Trophy Scatter also deserve a mention.
The Zombie FC slot game has a convenient betting range of $0.5 to $100 to offer, along with the option of playing it for free for you to get a hang of it. The game’s RTP is not known but what we do know is that the game’s max cash jackpot goes up to $1200, which means there is plenty to grab hold of in this game.

★★★★
Latrese M
Deadly good slot
This game is to die for lol. It’s a excellent way to survive the day to day boredom.
★★★★
Aaron B
Great game for a new one, im impressed
★★★
Marcus B
Scary Futbol
This game has a nice premise. i dont like the pays they are so minimal. Also the Bonus you get a multiplier for every win,it rises as you get more winning spin in a row!! (Only that rarely happens) I barely play this game anymore, its too frustrating!!

If quirky and thrilling themes are your thing when it comes to online slot games, then Zombie FC by Qora has to be your next shot. The game has been designed keeping a horror theme in mind, but that's not the only reason why it stands out. In fact, this slot game has some of the most significant prizes out of the multiple slot games we have tried, which goes perfectly well with its slightly fearsome gameplay. Zombie FC follows the traditional format of 3-rows and 5-reels, and boasts of several exciting game features like regular Wilds, expanding Wilds, tumbling reels, and free spins. The game does not have any fixed pay lines to offer, instead there are 243 ways to win. Quite impressively, the setting of the game is in a stadium taken over by the undead, with zombies rallying around to kick start a football match.
The fearsome creatures take the lead throughout the gameplay, and appear as players, coaches, referees and even fans in the Zombie FC slot. These symbols, however, are the highest paying on the reels. Other symbols like football jerseys with numbers from 7 to 10 also abound, offering low to medium payouts. What we find most delightful is the level of detail that the game has been designed in, with a completely packed stadium of fans in the backdrop, and array of skyscrapers fading away to the horizon, and horrifying zombies taking the fore on the reels.
Apart from the regular symbols we talked about, the Zombie FC slot also features special characters like the Expanding Wild zombie player, the regular Wild Football, and the Bloody Trophy Scatter. Out of these, the football wild substitutes all regular symbols whenever it appears, leading to new winning possibilities on the last three reels. The expanding wild football player can expand to cover the entire reel whenever it appears on a single spot. This again leads to substitution of regular symbols and creation of new winning combinations.
Lastly, we come to the scatter, landing three of which gives you 15 free spins, four give 20, while five lead to 25. All these Free Spins come with the possibility of pairing up with 10x multipliers as well – a major win-win!
Another point to note is that the betting range on the Zombie FC slot game by Qora is fairly convenient ranging from $0.5 to $100, which is great for all pocket sizes. If you want, you can also play the game for free first as a demo followed by playing it for real money when you get a hang of it. Although we do not know the game’s RTP, but what we do know is that with a max cash jackpot of $1200, the Zombie FC slot is highly rewarding and worth a try.