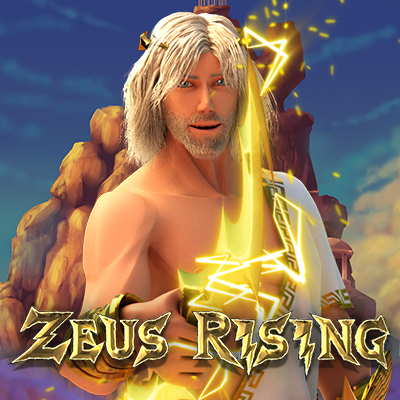 Based on the theme of the mighty Greek Gods, Zeus Rising is an exciting new slot game featuring the standard format of 3 rows and 5 reels. The game is heavily inspired by the unique legacy of Zeus, the thunder-wielding King of Gods, with all symbols and features of the game drawing from the age-old Greek legacy. The rich and colourful video slot game by Saucify features on its reels lightning-shaped playing card symbols of A, K, Q and J, with the lofty Mount Olympus covered in mist for its backdrop. The unique, raw and antique feature of the game seem to be heightened by the presence of unique character symbols, such as the Eagle, Bull and Tree, all laced in white, gold and brown. Zeus is the highest paying symbol on the reels, which also feature special Wilds and Free Spins symbols.
While the Thunderbolt Wild can appear anywhere on the reels and replace all symbols except the Scatter to form new winning combinations, the Triple High Zeus Wild appears only on Reel 3 and the Random Wild appears only on Reels 1, 2 and 4. Both can appear only during the Free Spins round, which gets activated in the presence of at least three Cyclops Scatter symbols. Overall, the game has an exciting gameplay and highly rewarding features, and is a must-try for every slot lover.

Themed around the mighty and mystical land of the Greek Gods, Zeus Rising is an exciting new 3-rows, 5-reels video slot game presented by Saucify that is filled with powerful characters and unique descriptions. For its background, the game has the tall and mighty Mount Olympus covered in misty clouds, while the fore is taken up with antique yet royal-looking creatures and characters right out of popular Greek mythology. Together with its excellent graphics and an engaging soundtrack, the riveting gameplay of Zeus Rising is augmented by its wide variety of exciting features, including Free Spins, Free Spins Wild Middle Reel and Free Spins Random Wild. Symbols on the reels are a rich mix too, and include icons on both high and low ends of the spectrum. The gaming card symbols of A, K, Q and J may not be very high-paying, but appear more frequently during the game and are adorned to resemble strokes of lightning, it being the magical power of Zeus. On the other hand, uniquely adorned golden-white-brown symbols of the Eagle, Bull and Tree speak of the brilliant glory of the Greek Gods. The symbol of Zeus is the highest paying on the reels, apart from the special symbols that bring in special rewards.
The Thunderbolt Wild symbol can substitute any other symbols on the reels other than the Scatter to create new winning combinations. There is also another exclusive Triple High Zeus Wild which appears only on Reel 3 during the Free Spins and remains locked in position for the rest of the game feature. The Cyclops is the Free Spins symbol on the reels, landing three or more of which anywhere in the game activates the Free Spins feature game.
Free Spins can be reactivated any number of times during the feature. This round is special for another reason – the Random Wild. This special symbol appears only during the Free Spins round either on reels 1, 2 or 4 and can replace all other symbols on the reels except the Scatter itself, thus forming new win possibilities to reap benefits from.
Zeus Rising has a 5-coin and 20-line gameplay to offer, and makes for a super-entertaining and highly rewarding gaming experience overall. Players can bag up to 12,480 coins and 25 Free Spins in all during the game. All payline wins get multiplied by credits wagered per line. Only the highest win is paid on each active payline.