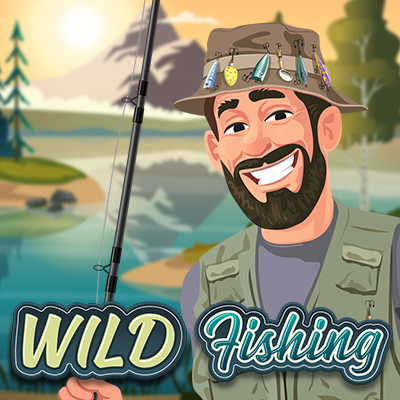 Wild Fishing by Saucify Games is one that is heavily inspired by the beauty of nature and the immersive experience of engaging with it. The game is based on the theme of freshwater fishing, with a random North American river for its backdrop, lined with low hills in the far distance and lofty trees sealing the look. All that the player must do is to be as patient as the fisherman himself before they get to rake in the big rewards.Symbols on the reels of Wild Fishing include the high-paying catfish, the carp, a rainbow trout and a perch, which are all high paying. There are also playing card symbols of A, K Q and J, which are designed to resemble aquatic creatures too. The Wild is in the form of a bent fishing rod, which can replace any other symbols on the reels to form new winning combinations.
Landing three or more Free Spins symbols, represented by a winding handle, can trigger the exclusive Free Spins round. Similarly, landing three or more Feature symbols, which are in the form of a sophistically arranged box, activates the special Feature game round for those extra wins.

Wouldn’t it be fancier to take a break away from the maddening hustle and bustle of commonplace slot games today and delve into a soothing experience instead? Well, Wild Fishing by Saucify is an online casino game that does exactly this for you. The 3-rows, 5-reels slot game draws from the visual and sensory appeal of beautiful natural elements, such as lush green grasses and trees, the serene hilly landscape, humming bees and dragonflies, clear running water and the twinkling sun. All that the players have to do, just like a day spent fishing, is to wait patiently for the biggest wins.The theme of the game is crystal clear right from the start – freshwater fishing in a landscape set in the backdrop of a North American river. Illustrative fish and tackle symbols line the reels in a visually appealing manner, emanating a captivating experience for the player to relish. The reels feature both high and low paying symbols. Fishes such as catfish, carps, rainbow trout and perches make for the higher paying symbols while playing card icons of A, K, Q and J, fashioned in the form of aquatic creatures, are the low-paying counterparts.
The Wild on the game is a fishing rod arranged in a neat circular fashion, which can replace any other symbols on the reels whenever it lands anywhere on the reels. The winding handle of the rod appears as the Free Spins icon, activating the highly rewarding Free Spins feature game whenever it appears in a combination of three or more. Additionally, the Feature symbol, represented by a highly sophisticated and neatly arranged box, triggers the special feature game upon landing thrice simultaneously on the reels. While this feature cannot be triggered during the Free Spins round, there are two different feature games to choose from and win the rewards of your choice.
The Scatter symbol is represented by the jolly and fun-loving fisherman himself. All Scatter wins are multiplied by the total bet staked and added over and above the payline wins. In a nutshell, Qild Fishing is not just a visual escapade from the robotic slot game themes, but also a highly rewarding experience for all players who are seeking big thrills and bigger rewards from their next casino gaming adventure.