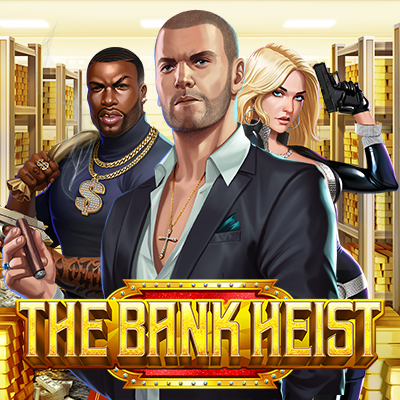 The Bank Heist is a standard 3-rows, 5-reels format slot game with a not-so-common theme around bank robbery by a team of bandits. Inspired by Hollywood action movies, the online video slot game takes the player into a vault filled with gold bars, where they become a part of the robbery and grab as many riches as they can.

The Bank Heist features symbols that are tailored to its theme in style and choice. The most rewarding symbols are the character symbols of the three bandits, followed by mid-value symbols of a cash bundle, a safe, and a golden ring. The playing card icons of A, K, Q, J, and 10 are at the lower end of the spectrum.

The game also features Wilds in the form of a golden chain and Scatters in the form of dollar symbols in three variations - $, $$, and $$$. These special symbols bring in new winning combinations and free spins for players respectively. Scatters also offer players a bonus game and multipliers! The USP of The Bank Heist is its Gamble feature round, where players get a chance to double and quadruple their winnings just by making the right guesses!

The Bank Heist by Dragon Gaming is an action-inspired online video slot game that revolves around a bank robbery by a gang of bandits. As the player, you get to be a part of the robbery too and enter a vault full of gold bars. The 5-reels, 3-rows slot game has a lot of rewarding potential for those who are ready to take big risks, and there are plenty of exciting features to win big with.

The Bank Heist is inspired by Hollywood action movies where payers are in for big wins. The backdrop of this beautifully designed game features a large bank adorned in typical classical architecture in a white-golden color pairing. At the fore are the 3-rows and 5-reels slot, with symbols customized to represent the riches and luxury items of the bank. The bundle of cash, a safe, and a golden ring are the medium-paying symbols of the game, while the three bandits are the most rewarding. The playing card icons of A, K, Q, J, and 10 form the lower end of the paytable.

The dollar symbols are the Scatters and are of three different types - $, $$, and $$$. The total number of dollar signs that appear on the reels will determine the number of extra spins you will be awarded, and can go up to a maximum of 15. Landing at least 3 Scatters anywhere on the reels triggers the bonus rounds, and free spins can be re-triggered during the round itself.

The vault symbol is a multiplier. When it appears on reel 5 during the bonus game, it multiplies all the winnings for the remainder of the round by 1x, 2x, or 3x, depending on which vault icon appears – bronze, silver, or gold. The Wild on the game is a golden chain that can replace all symbols on the reels to create new winning combinations.

Another interesting feature of The Bank Heist is its Gamble feature round. After every win, players have a chance to double their winnings by guessing the correct card color and even quadruple them by guessing the right card suit.

With a total of 10 paylines and an above-average RTP of 96%, the game supports 26+ languages and 30+ currencies. Payouts are from left to right. Built on HTML5, The Bank Heist can be played across different devices – smartphones, laptops, and desktops alike – and on both Android and iOS platforms.