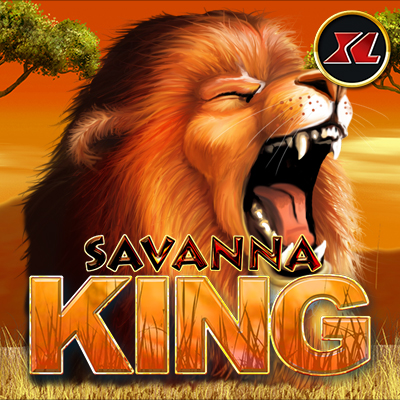 Savanna King XL by Qora Games is quite similar to the former versions of the game in its series, and yet stands out of the crowd like never before. Set in the African green landscape, with eye-catching visuals, scenic backdrops, and interesting game elements, Savanna King XL has been designed with great focus on the detail.Symbols on the reels include the low paying playing card icons A, K, Q, and J, besides the highly rewarding symbols of Zebra, Lion, Rhino, and Giraffe. Other symbols of importance in the game are the Wild, which can replace all regular symbols to create new winning combinations, and the game logo Scatter that activates the Savanna Stampede Free Spins feature, rewarding 8, 15, and 20 Free Spins for landing 3, 4, and 5 Scatters, respectively. When one or more Wilds is substituted in a win, the highest win is paid. Wilds appear on reels 2, 3, and 4.A point to note is that Wilds may get multiplied together. For instance, 2x Wilds in the reel window will multiply all wins by 4. This exclusive Wild Multiplier feature take the Wild Multiplier value up to a massive 64 times, in case of 3 features of 4x value each. The conventional 5 reels and 4 rows format of the Savanna King slot game series is continued in this game as well. Wilds may get multiplied during the feature game to reveal even higher rewards. The Savanna King XL slot game offers a high RTP of 96.16%, with up to 32000x worth Jackpots on the table. The maximum rewards may go up to $200,000, while the maximum betting can reach 5,000x only. The high volatility of Savanna King XL means that you can always rest assured winnings are going to be on the larger side. You can play this slot game either for free or for real money, depending on your choice. In any way, it makes for a highly entertaining online casino game for all kinds of slot lovers.

The third game in the series, and quite similar to its former versions, Savanna King XL by Qora Games is set in the unique backdrop of Africa’s lush greenery. The game’s visuals are particularly eye-catching, with a gorgeous clear blue sky in the backdrop. Huge native trees flank either side of the reels. The array of symbols on the reels has been designed to the detail, featuring high-value Lions, Giraffes, Zebras, and Rhinos, medium-value logos, as well as lower value symbols of A, K, Q, and J. The card rank and giraffe symbols require three to give you a win. The zebra, lion, and rhino symbols only require two.  The overall theme of African wildlife is completed with gently swaying grasses and stones in the foreground. The Savanna King XL game follows a conventional 5-reels, 4-rows format, offering 1024 ways to win. There are two special bonus symbols to look out for. The first is the Wild, with an indigenous shield for its backdrop. The Wild will substitute for all regular symbols. When one or more Wilds is substituted in a win, the highest win is paid. Wilds appear on reels 2, 3, and 4. Besides rewarding Wilds, the game reels feature Multipliers that can take your bets up to 64x. The game logo functions as the Scatter, paying in any position. Landing 3, 4, or 5 Scatters, animated by the powerful antelope herd, activates the Savanna Stampede Free Spins feature, bringing 8, 15, and 20 Free Spins respectively for the player. Wilds, if any, during the feature can also end up revealing Multipliers of 2x, 3x, or 4x. interestingly, Multiple Wilds get multiplied together, meaning the 2x Wilds in the reel window will multiply all wins by 4. This exclusive Wild Multiplier feature can combine to potentially multiply wins by a massive 64 times! (3 Wild Multipliers of 4x each). With an impressive RTP of 96.16%, the Savanna King XL slot game manages to stand out of the crowd due to its maximum rewards of up to $200,000 on the table, and a maximum stake of up to 5000x. Not just that, there are 32,000x jackpots on the table, meaning that even the smaller bets will bring you long leaps. You can play Savanna King XL either for free or real money, depending on your choice. The slot game is highly volatile, so you can rest assure your wins will be on the larger side!