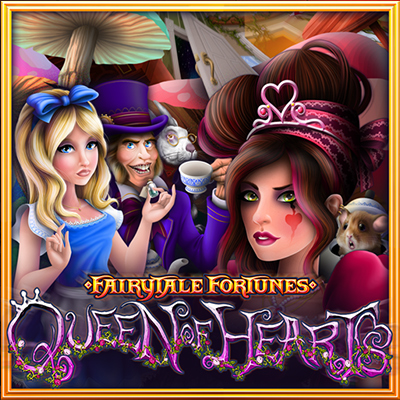 The timeless classic of Alice in Wonderland has inspired this all-new slot game by Rival Gaming, named after one of the fairy tale’s main characters – the Queen of Hearts. The 4-rows, 6-reels slot game boasts multiple feature games with changing backdrops, an array of visually detailed characters on its reels, and a betting range that fits all pocket sizes.Symbols on the reels of this slot game include characters from this world-favourite fairy tale itself, including the Queen of Hearts, Alice, the White Rabbit, the Mad March Hare and the Mad Hatter, along with the Dormouse, Absalom, the Caterpillar, the Sneaky Knave, and others. The Cheshire Cat, for instance, appears as the Expanding Wild symbol. Whenever it smiles, it ends up covering the adjacent reels and bringing in huge rewards for players.
Feature games make this online casino experience even more interesting, such as the Rabbit Hole Free Spins round where players can land 2x, 3x and 5x multipliers for all their bets. The Sneaky Knave symbol, on the other hand, takes players into the Queen of Hearts’ majestic tart chamber, activating the Steal a Tart bonus round. To top it all, the game has a near-average RTP of 95.3% and a medium-ranging coin betting size, making it fit for all slot lovers alike.

What’s better than an enchanting premise based on the fantastic world of fairy tales for a slot game? Queen of Hearts by Rival Gaming is one such online casino gaming experience that is inspired by the timeless classic tale of Alice in Wonderland. Players can relish in the fanciful journey against the backdrop of a fungi-filled forest down through the rabbit hole, proceeding to the deliciously amazing tart chamber of the Queen of Hearts!The six reels, 4096-win lines slot game boasts of an array of eccentric characters, including the Queen of Hearts, Alice, the White Rabbit, the Mad March Hare, the Queen’s Card Guards and the Mad Hatter. Also featuring on the reels are symbols of the Dormouse, Absalom, the Caterpillar the Sneaky Knave, and more. The Cheshire Cat acts as the Wild symbol on the game, offering massive rewards to players whenever it smiles. This could be followed up with highly rewarding multipliers of 2x, 3x and 5x whenever it appears during the Rabbit Hole Free Spins round.
The Sneaky Knave symbol is yet another exclusive symbol on the reel, landing three or more of which sneaks players into the Queen’s Tart Hall, triggering the Steal a Tart Bonus Game. Just like the fairy tale’s storyline, players can chase the White Rabbit down its hole and enter the impressive and highly engaging Wonderland of Winnings!
The graphics of this online casino game are a major point of attraction, with a fairytale-inspired theme lined in blush pink and gold colours, with the vibrant, flowers and toad-filled forest for its backdrop during the Wonderland escapade. When players are falling down the hole, they can see other household items and furniture in a jittery display surrounding them, while the scene of the Tart Chamber has two armed guards within a majestic hall to hype up the grand vibes.
With an expected Return to Player of 95.3%, Queen of Hearts offers coin sizes of 0.01, 0.05, 0.10 and 0.25 overall. 1 to 10 coins are wagered per line in this highly rewarding game that is just perfect for mid-rangers who do not wish to take huge risks. With interesting visuals and a catchy soundtrack, the Queen of Hearts slot game by Rival Gaming is the perfectly balanced slot gaming experience you were seeking with impressive rewards and surprises for players.