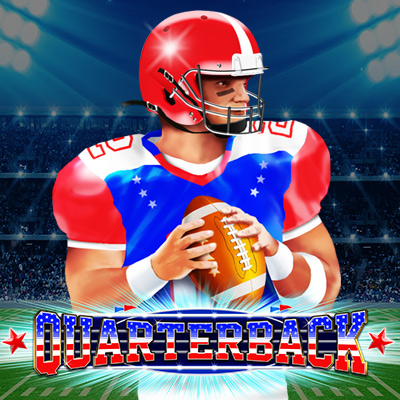 Quarterback by Saucify is an online video slot game following the traditional 3 rows, 5 reels format. Instead of any fixed paylines, the game offers 243 ways to win instead. The game is set against the backdrop of a fully packed and charged stadium waiting for the action to begin on the reels. Symbols have been designed keeping in mind this exciting theme and gameplay. They are complemented with interesting sound effects such as the whistle sounds of the referee, making the experience even more authentic.
Regular symbols aside, the game also offers a set of special symbols such as the Free Spins and Bonus. Landing 1, 3 or 5 Free Spin symbols rewards players with 10 Free Spins that can be re-triggered. The Quarterback bonus feature gets triggered whenever two quarterback symbols land on reels one and five simultaneously, offering players three options to score huge rewards. With an RTP of 94.95%, this medium variance slot is a powerhouse of everything you were looking for in a one-stop slot game destination.

Bringing to players’ screens the charm of modern slot gaming, Quarterback by Saucify takes players to a packed football stadium where the action is set to take place on the reels. The slot game follows the traditional 3 rows, 5 reels format, though it offers 243 ways to win instead of any fixed paylines. There are 12 different symbols on the reels in all, including high-paying images inspired from the slot game itself such as the Game Title, Goal Posts, Football, Player Jersey, Helmet and Boot. There are also six low paying playing card symbols A, K, Q, J, 10 and 9 on the reels that appear frequently and offer nominal payouts. Cleverly designed symbols and tasteful graphics are complemented with interesting sound effects such as the whistle sounds of the referee, making the experience even more authentic.
Apart from the regular symbols, there are also some special symbols on the reels including the Free Spins symbol, landing 1, 3 and 5 of which triggers 10 Free Spins. The feature can be re-triggered but will not be accompanied by any other feature once it does.
The exclusive Quarterback bonus feature gets triggered whenever two quarterback symbols land on reels one and five simultaneously. These are the thrower and catcher, providing players with three options. They can either Pick a Ball to reveal the hidden prize beneath, Run the Yards to win 1x multiplier for each yard until tackled, and Kick a Field Goal to take a chance with the Jackpot. Every 100-yard run is rewarded with a mysterious but valuable bonus prize.
Quarterback can be played both for free and real money, in case you were wanting to get a taste of the game before actually investing money into it. It it's always recommended to set a budget for every session you play with real money. The game’s official RTP stands at 94.95%, which falls behind the average RTP expected in the slot gaming universe. However, the multiple features like Scatters, Bonuses, Multipliers, and Free Spins along with an interesting premise make this medium variance slot fairly enjoyable for all kinds of slot lovers.