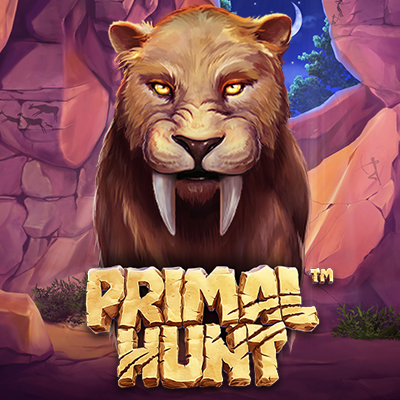 Presented by Betsoft, Primal Hunt is a 5x4 online video slot game that offers 80 paylines and myriad features such as Scatters, Wilds, Free Spins, Expanding Symbols, Multipliers, and more. The game can be played for free as well as for real money, and is suited for every pocket size with a betting range of $0.10 and $20. The saber-tooth tiger, which is the Scatter symbol, is also the central character of the game. Players can win anything from 8x to 96x their bet and 8 to 20 free spins on landing these Scatters in combinations of 3, 4, or 5. The cave lion is the Wild symbol on the reels and can replace all symbols other than the Scatter. As wilds appear stacked, you might end up with an entire reel filled with Wild symbols, leading to huge prizes.
Primal Hunt is a medium volatility video slot game that offers an above-average RTP of 96.10%, and maximum payouts of 4420x the stake or $88,406 in cash. The game can be called a perfect mix of entertainment and prizes in one.

Primal Hunt by Betsoft is a unique 5x4 online video slot game based on the theme of the distant past, deriving inspiration from the caves and implements of the stone age. With an impressive 80 paylines, the game boasts interesting features such as Scatter symbols, Free Spins, Expanding Symbols, Wilds with Multipliers, and more. Betsoft maintains its niche for excellent graphics and animation with this slot game as well, which can be played both for free and for real money. The Stone Age theme of the game has a fearsome saber-tooth tiger as its central character, along with other symbols such as crude weapons, cave art bearing horses, antelopes, mammoths, and bison figures along with crude royals made out of stone and tied with rope.
The Wild symbol in the game is the cave lion, which can replace all other symbols except the Scatter. The wilds are stacked on the reels, meaning you might end up with an entire reel filled with wilds and gain an enormous prize. Other symbols might also appear stacked on the reels.
The Scatter, or the saber-tooth tiger, is highly rewarding as well. Landing 3, 4, or 5 of these anywhere on the reels in a single spin rewards players with 8x, 16x, and 96x on their bet respectively, along with 8, 12, and 20 free spins. Free spins can be retriggered if you manage to land three or more Scatters on the reels again while the feature is still active. The Free Spins come with a 2x or 3x multiplier attached to them, which can take your wins significantly higher.
The betting range on the game varies from $0.10 to $20, which is neither too high nor too low, and thus great for every pocket size. The betting options are all listed clearly at the bottom of the screen for you to choose from. The highest payouts on Primal Hunt can go up to 4420x the stake, or $88,406, which is great for a medium volatility game. The RTP of this online casino game is quite high as well; at 96.10% it is higher than the industry average.
Primal Hunt by Betsoft makes for both an entertaining and highly rewarding gameplay, with both low and high stakes for people who want to play with real money. With instant scatter payouts, brilliant graphics, and sound effects, and perfect compatibility with different devices and operating systems, Primal Hunt makes for the perfect slot game experience.