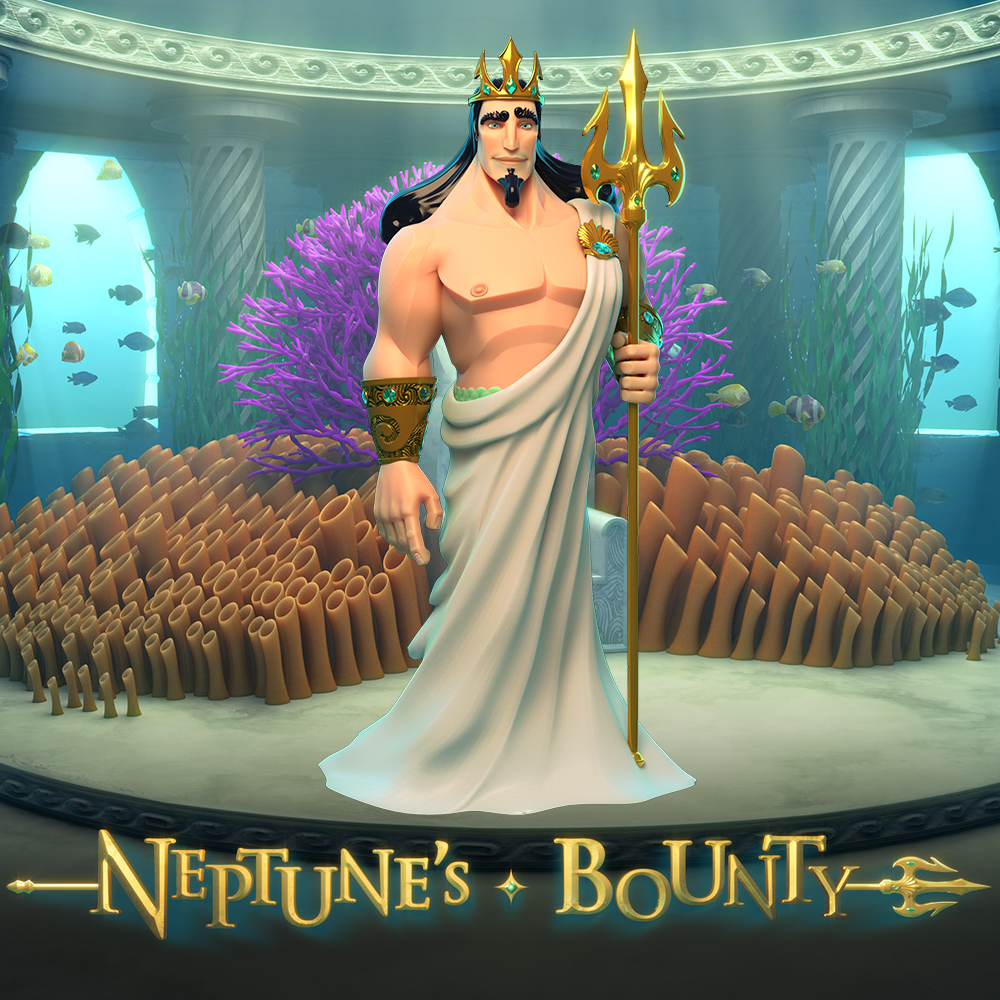 Neptune, as you know, is the god of the sea in Roman mythology, and he reigns supreme over all those who dwell in his watery kingdom.  In this slot that features beautiful graphics, you are invited to dive deep to see what riches you can win.This five-reel, three-line slot with 15 fixed paylines features symbols such as a pearl in an oyster, a jellyfish, a conch shell, Neptune’s trident, dolphins and seahorses. The playing card symbols have been rendered as delicate corals, each of a different type and color. Neptune himself is the Wild and can sometimes appear expanded over two lines offering loads of winning combinations, while Neptune’s Palace is the Free Spins scatter symbol, awarding 15¬–22 free spins, depending on the number of symbols landed on the reels.
The Neptune’s Bounty clamshell is also a scatter, but awards a Bonus Game if landing three or more on the reels. Here you get to choose between Neptune’s Throne Room or Kraken’s Cavern, where you must click on three clams or sea chests, respectively, to reveal your winning amount. If you choose exactly right, you will be richly rewarded!
With a dreamy audio track, sea creature sound effects, and rather clever animations of the symbols when forming part of winning combinations, Neptune’s Bounty is both relaxing to play and aesthetically pleasing, while providing the potential for some big wins.

Neptune’s Bounty is another winner from the Saucify stable. Excellent graphics bring the five-reel, 3-line slot’s undersea world to life, with symbols such as a pearl in an oyster, a jellyfish, a conch shell, Neptune’s golden trident, dolphins and seahorses. The playing card symbols have been rendered as colorful, delicate corals, each of a different type.  Neptune, the mighty mythological Roman god of the sea, is the Wild symbol and often appears as an expanding wild over two lines, greatly enhancing his ability to form winning combinations across the game’s 15 fixed paylines. Neptune’s Palace is the Free Spins symbol and awards up to 22 free spins, depending on the number of symbols landed on the reels.
The fun and exciting feature of Neptune’s Bounty is the Bonus Game feature, which is activated when three or more Neptune’s Bounty clamshells appear on the gameboard. When this happens, the player must choose between two bonus game options: Neptune’s Throne Room or Kraken’s Cavern. Both options have a number of closed objects – the Throne Room has giant clams and the Kraken’s Cavern has sea chests. The player has to choose and click on three of these to reveal the value of the prizes, which can be very generous!
Neptune’s Bounty has a soothing soundtrack and visually pleasing graphics with some clever animation. This undersea world makes for relaxing entertainment, while still offering the excitement of some rewarding wins. So dip your toe in or dive right in ¬to win your share of Neptune’s Bounty.