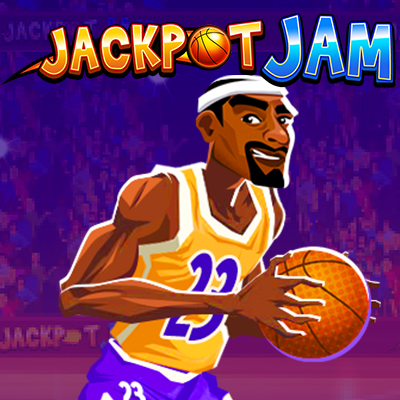 Jackpot Jam by Arrow’s Edge is a 3-reels, 3-rows online video slot game that brings together our love for basketball and casino games in one. The background of the game features a basketball court and crowded stands cheering the players on. The already charged atmosphere is augmented with a jammy hype soundtrack, which adds to the thrill of the game. The game is inspired from the good old All Star games, featuring basketball hoops, red, green, and blue-coloured 7s, and single, double, and triple bars for its symbols. The basketball player is the Wild in the game, and can substitute any other symbols to form new winning combinations. It is also the highest paying symbol, offering up to 10,000 times the base bet. The basketball is the Bonus symbol on the reels, which can trigger Free Spins each time two of these land on reels 1 and 3. Free Spins can be re-triggered as well.
Jackpot Jam, as the name already gives away, is best known for its Progressive Jackpots of three different types. This includes the Cash Grab Jackpot, offering between $2,000 to $5,000, the frequently appearing Mystery Jackpot, offering between $9,000 to $10,000, and the Super Slots Jackpot, offering between $40,000 and $45,000. With an exciting premise to complement impressive rewards, Jackpot Jam is a must-try for all slot lovers!

Jackpot Jam follows a traditional 3-rows, 3-reels format and offers 4 fixed paylines. With a basketball court for its background, Jackpot Jam features crowded stands in the backdrop, cheering the players on. The charged atmosphere is completed with a jammy hype soundtrack, which somehow adds to the fun and thrill of the slot game. Coming to the reels and its symbols, be prepared for basketball hoops, the number 7 in red, green, and blue, and single, double, and triple bars. The MVP basketball player is the Wild as well as the highest paying symbol in the entire game, rewarding players with up to 10,000 times their base bet. It can also substitute any other symbols on the reels to create new winning combinations.
On the other hand, the basketball is the Bonus symbol, bringing in some extra rewards for players from time to time. Whenever two bonus symbols land on reels 1 and 3 simultaneously, the Free Spins feature gets triggered, rewarding players with 5, 10 or 15 Free Spins instantly. This feature can be re-activated during the round, and rewards get chosen at random this time.
Winning on Jackpot Jam is as simple as on any other slot game – all you need to do is match at least three symbols from left to right. One can also win by bringing together either the different coloured 7 symbols, or different numbers of Bars. Apart from these basic rewards, players also have the highly rewarding Progressive Jackpots feature to win from, which can get triggered after any random spin.
The game offers three types of Progressive Jackpots – the lowest paying is the Cash Grab Jackpot, which offers between $2,000 to $5,000. Next comes the Mystery Jackpot, offering between $9,000 to $10,000, while also being the most frequent Jackpot during the game. Lastly, the Super Slots Jackpot offers massive amounts, between $40,000 to $45,000, though it is somewhat rare to land.
Jackpot Jam might not come across as very rewarding if you consider its base game RTP of 94.7%, but combined with its Jackpots, it goes up to 96.7%, which is impressive. The high volatility game has a coin bet range of 0.04 to 60, which makes it a game for every pocket size. If you are into both basketball and online casinos, you will thoroughly enjoy Jackpot Jam. Give it a try!