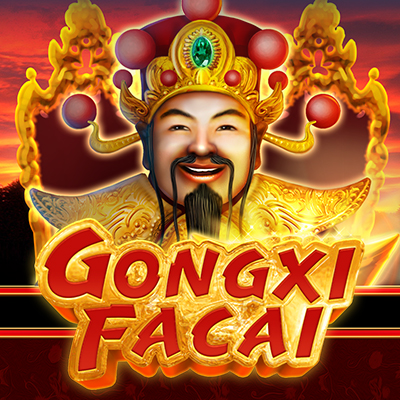 Gong Xi Fa Cai is a 3 rows, 5 reels video slot game by Qora Gaming that is based on the theme of the Chinese New Year and derives both its appearance and rewarding features from this celebratory theme. The 243-way online casino game boasts highly rewarding features like Scatters, Free Spins, Multipliers, Wilds, and more!The phrase Gong Xi Fa Cai literally translates to “Best wishes and greetings, much health and prosperity!”. The game certainly lives up to its name with Cai Shen, the God of Wealth, showering bountiful rewards on players. Symbols on the reels include tigers, roosters, dogs, and koi fish, along with colourful dragons.
The game also features the Chinese letter Scatter and the Wild, the former triggering Free Spins and the latter leading to new winning combinations and win multipliers. Gong Xi Fa Cai also boasts of four jackpots – Mini, Minor, Major, and Maxi – each with its own bonus amount and getting triggered at random. With its high volatility, gratifying features, convenient betting range and impressive RTP, Gong Xi Fa Cai makes for both an entertaining and rewarding gameplay – a slot game rarity that you must give a try.

Presented by Qora Gaming, Gong Xi Fa Cai is an exciting and aesthetic 3-rows, 5-reels video slot game that ushers in the Chinese New Year with exuberance and colours. Featuring an engaging soundtrack, compelling illustrations, and highly rewarding features, such as Scatters, Free Spins, Wilds, Multipliers, and Jackpots, Gong Xi Fa Cai is a 243-way online casino game that you must try.Gong Xi Fa Cai literally translates into “Best wishes and greetings, much health and prosperity!”. The game is centred around the warmth, goodwill, and love that the Chinese New Year stands for, with Cai Shen – the God of Wealth – guiding the players through the base game. Symbols on the reels include tigers, roosters, dogs, and koi fish, along with multi-coloured dragons joining in the revelry.
The game has several treasures to offer, and this is highlighted by the special character along with the reels, seemingly part of the New Year’s parade. The Scatter symbol is denoted by a special Chinese letter. When 3 or more Scatters land on reels 1, 3, and 5, the Fa Cai Free Spins feature gets triggered. Here, players can select one out of the five Free Spin series, to unlock up to 20 Free Spins and a possible Wilds multiplier of 30X for huge rewards. These Free Spins can also be triggered again during the feature.
Bringing in even further surprises are four jackpots – Mini, Minor, Major, and Maxi. Each of these jackpots comes with a fixed bonus amount and could get triggered after any random spin. Gong Xi Fa Cai is all about celebrations and festivity, and the same is reflected in the multiple features and rewards that the game presents to players, such as the total of 88 Free Spins during a game. These Free Spins see even more delightful when you consider the fact that there are no low paying playing card symbols of A, K, Q, J, and 10 during this exclusive round. Besides, animal symbols turn into gold, taking their values even higher. The Dragon symbol would normally pay 550 coins for a combination of 5 but pays 750 coins during the Free Spins feature game.
Gong Xi Fa Cai is a high volatility slot game with an RTP of 96%, meaning you can expect to bag amazing rewards from its feature line-up. Compatible with multiple devices, platforms, currencies, and languages, this is one slot game that you must try.