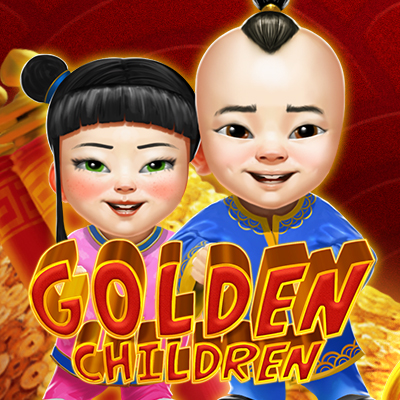 The Golden Children slot game by Qora games is one of the most entertaining and highly rewarding slot games that you will come across, and comes in a 4-rows, 5-reels, and 100-paylines format. Offering a glimpse into the intriguing oriental world of mysterious legends, exotic artifacts, and unique practices, the Golden Children slot is based on the legend of the goddess of mercy and compassion called Guan Yin, and two Golden Children who were born to help her distribute fortunes into the world. This slot game is an interesting take on this legend, with the two Golden Children appearing on the reels to bring good fortune and celebration to the game’s players. Apart from the regular symbols of playing cards and Chinese traditional elements, there are also some special symbols such as the pot of gold Scatter and the scroll Wild. These symbols not only create new winning possibilities but also offer massive rewards to players during the gameplay.
The game has an exclusive bonus round called the Wild scrolls free spins bonus. What stands out the most about this well-known lighthearted theme is it highly rendered style and RTP of 97%, along with the feature of super stacked symbols that keeps the player engaged with the possibility of massive prizes.

The Golden Children slot game by Qora games is one of the most refreshing online casino games that you will come across these days, and is based on a serene and beautiful oriental/ Asian theme. The 4-rows, 5-reels, and 100-paylines online slot game it's quite generous in terms of rewards, besides boasting of a fast-paced gameplay. The game acts like a window into an intriguing world full of wonder with mysterious legends, exotic artifacts, and unique practices. At the center of the game is the legendary Chinese goddess Guan Yin, also known as the goddess of mercy and compassion. Legend goes that there were two children who were born to help the goddess Guan Yin in her role of helping people in need. The two immortal children came with rich treasures, which they bestowed upon the needy, and thus came to be known as the Golden Children. This slot game is a reference to these very Golden Children, who now appear on the rails bringing tremendous fortune to all players. Each time you score a win in the game, the happy and smiling children clap and dance around the screen for you.
There is a huge variety of symbols on the reels, including low paying playing card symbols of a, k, q, j, and 10, along with traditional Chinese symbols such as scrolls and cards. The exclusive Scatter symbol is represented in the form of a pot of gold, landing 3, 4, or 5 of which can win you twice the total bet besides 5, 10, and 25 free spins respectively. The Wild on the game is in the form of a scroll and can replace all regular symbols other than the Scatter. If one or more Wilds substitute in a win, the highest win is paid.
The Golden Children slot game also features an entertaining bonus round called the Wild scrolls. Whenever you land 3, 4 or 5 Scatters on the reels, free spins are triggered. In each free spin, of the five reels get completely filled with Wild symbols at random. While you can retrigger this feature during the same round, you get more free spins to win rewards with. The additional feature of super stacked symbols makes the game even more engaging while creating new winning possibilities.
This slot game by Qora games can be played both for real money and as a demo and is therefore suitable for all kinds of players - both newbies and veterans. Whether you want to play this game for real rewards or just for fun, the game’s impressive RTP of 97% and fast-paced gameplay make it one of the most entertaining slot game options available today.