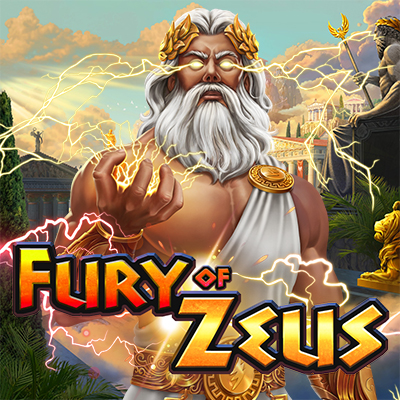 Fury of Zeus is a 3-rows, 5-reels, 20 paylines online casino game that is based on the theme of Greek mythology and borrows royals and gods for its game characters. With Zeus being both the central character and the highest paying symbol on the reels, the game also features other Greek gods such as Poseidon, Hera, and Hades. Interesting features of the game include Wilds, which can replace any symbols on the reels other than the Scatter, Scatters that can unlock new rewards, Free Spins, that can bring in additional rewards for players during the game, and Progressive Jackpots for filling up pockets with accrued rewards.
With an RTP of 95% and an extreme volatility throughout the gameplay, Fury of Zeus is quite fast-paced and highly rewarding. While the value of the Progressive Jackpots might not match up to that of other online casino games in the market, the wide betting range ensures that this is one game for every pocket size.
Fury of Zeus is supported across multiple platforms and supports various types of currencies from across the world. Its interactive user interface, paired with the impressive rewards and interesting premise make for a memorable gameplay for all kinds of slot lovers.

The King of Gods descends with all his fury and wrath in this interesting online casino game from the Bovada family. Deriving its premise, characters and illustrations from Greek mythology, Fury of Zeus is a 3-rows, 5-reels slot game that features a most interesting combat among Zeus, Poseidon, and Hades in their quest to win mammoth rewards. The plot of this online casino game derives from the rage of Zeus on mankind, and the various ways in which this wrath of his needs to be quelled for peace and serenity. Fury of Zeus features several royal characters, and popular Greek gods Hades, Poseidon, Hera, and Zeus on the reels. The game’s features include Wilds, Scatters Free Spins, as well as Progressive Jackpots.
Zeus happens to be the highest paying symbol on the reels, rewarding players with 2500 credits for 5 of a kind. The Wild symbol on the game, with the word Wild written across in golden colour, can replace any other symbol on the reels other than the Scatter. Also, it can only appear on reels one through four during the base game. The Wild pays on its own as well in case you were wondering if there are any extra wins involved.
The Scatter symbol pays even on two of a kind. At the same time, the Scatter can be a part of the reel win to unlock the Free Spins feature of the game. The Free Spins round gets triggered each time a Wild symbol appears on the reels, and players get a chance to trigger the Free Spins if they so wish. They get rewarded with 10 Free Spins along with a 2x multiplier for a single wild on the reels. It is only during the Free Spins round that the Wild symbol may also appear on the 5th reel, rewarding you with 5 additional free spins.
One of the most interesting features of Fury of Zeus is its Progressive Jackpot game, which might get triggered randomly without any special requirements. Although compared to other jackpots, the one on this game may appear smaller between $10,000 to $20,000, it is clearly very realistic and frequent to be able to win big bets from.
With a minimum bet of 0.02 and a maximum of 200, Fury of Zeus is one game for every pocket size. The 20 lines game offers 2500 times maximum exposure to the total bet and a doable RTP of 95%. The game is of extreme volatility and offers Auto-Spins and Quick Spins.