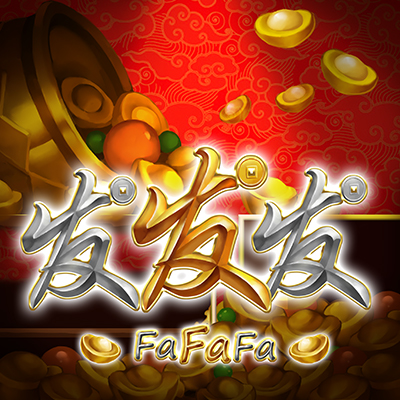 Fa Fa Fa by Qora Games brings an ageless, classic edge to the world of online casino games, with its timeless simplicity that suits the 19th century slot machines people loved to engage in. This very simplicity is the highlight of the game as well, with a single horizontal payline across the middle reel in this 3-reel online casino format to offer any wins. The only character in this straightforward online casino game is the Mandarin phrase ‘Fa’, which translates into law or standard. The game can be played for free as well for real cash, with bets starting at just 0.02, and going up to 80.00, thus suiting every pocket size. The only four symbols in this game are the Fa symbols in different colours, and players must land three of them – no matter in what colour combination – to register a win. Of course, landing all three identical symbols will offer the highest rewards.
With an RTP of 97.1%, Fa Fa Fa by Qora Games is quite rewarding considering its simple premise and lack of features. If you are someone who wants to invest time in slots just for the sake of entertainment and not chasing jackpots, this is the perfect game for you.

Fa Fa Fa by Qora Games brings to your screen the ageless appeal of single payline games with its classic premise. The special gameplay has a very timeless edge to it, with its simplicity being its major focus. The single horizontal payline across the middle in this game that offers 3 reels has a single character in focus – the Mandarin phrase ‘Fa’, meaning law or standard. The interesting slot game Fa Fa Fa can be played both for free and for real cash, with the lowest bet starting at just 0.02. This itself speaks about the convenient betting range the game offers for every pocket size. Add to that the top bet value, at 80.0, and this game is sure to attract even those who are seeking bigger hits. Running from left to right, the single payline is also a cause for concern, because wins sometimes go amiss on this payline. However, with some patience, those rewards are sure to come.
Fa Fa Fa has only a limited number of regular symbols to play with, and no Wilds, Scatters, or other extra features. The green Fa symbols pay 25 coins, the blue ones pay 50, and the red ones give out a jackpot offer of 100 coins for landing three identical ones across the middle reel. If you can manage to land even three different Fa colours on the middle reel, you still get 5 points, because this is also rare with Fas usually landing between the reels.
As soon as you win, the Fa symbol will burst into flames, offering a most distinct and enthralling visual effect for the player. The impressive game RTP of 97.1% and its medium volatility are also assisting factors when it comes to characterizing the fun and prize attached to the game.