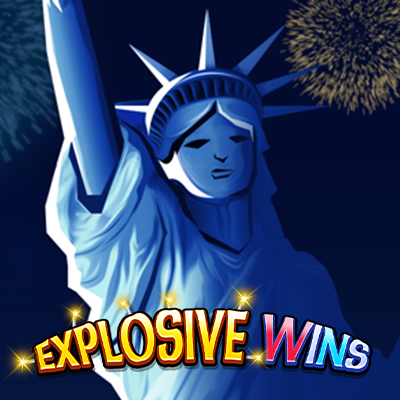 Explosive Wins by Arrow’s Edge is a classic 3-rows, 3-reels online slot game that is based on the theme of the American celebrations of 4th July. True to its name, the game has a lot to offer for players who are ready to take higher risks and enjoy the game’s modern, highly-rewarding features.

Game symbols on Explosive Wins are simple and include traditional red, blue, and green colored 7s and single, double and triple bars. Special symbols include the American Flag Wild, which can replace any other symbol on the reels and create new winning possibilities. Besides, landing 3 wilds on a single payline can reward players with a massive 10,000x multiplier for their line bet!

The fireworks bonus symbols are the next, landing 4 of which in 4 corners of the slot bring instant cash prizes to players. That’s not all – Explosive Wins links to two Progressive Jackpots that can be won on any spin. The Super Slots Jackpot is the rarer but more valuable one, while the Mystery Jackpot is lower in value but more frequent in appearance. The jackpots take the RTP of Explosive Wins from its base game value of 94.55% to 95.17%, making this high-volatility game truly explosive in terms of rewards.

Explosive Wins by Arrow’s Edge is an online slot game based on the theme of the celebration of 4th July in America, replete with fireworks, flags, and frenzy. Despite a classic slot format of 3 reels and 3 rows, Explosive Wins comes packed with an array of exciting modern features that keep up with the game’s title and offer massive rewards to players. The theme and appearance of the slot game emanate fireworks, celebration, and vibrance, while its features make the game highly rewarding to players.

The slot has some traditional symbols in the form of red, blue, and green 7s, and single, double, and triple bars. Landing a combination of any three 7 or any three bar symbols rewards players with a win. The special symbols on the reels include the American flag Wild symbol, which is also the most valuable symbol on the reels. Wilds can replace any other symbol whenever they appear, creating new winning combinations for players. Besides, landing three Wilds on a single payline also rewards players with a multiplier of 10000x their line bet!

The second feature is that of the Fireworks Bonus. If 4 of these symbols appear on all four corners of the reels in a single spin, players are in for some huge wins. You can click on the Fireworks bonus to reveal the hidden prize underneath and secure instant cash prizes that get added immediately to your payline wins.

That’s not all though. Explosive Wins also comes with two unique progressive jackpots over and above the massive 10,000x multiplier. The progressive jackpots can be won on any spin, and are of two types: The Super Slots Jackpot can be normally hit when it is worth between $40,000 and $45,000. The Mystery Jackpot is won more frequently and is hit when it is worth anything between $9,000 and $10,000.

Explosive Wins by Arrow’s Edge comes with a base game RTP of 94.55%, which is slightly below the industry average for online casino games. Including jackpots, the game’s RTP reaches 95.17%. This high-volatility game is perfect for those who are seeking high rewards in a fast-paced environment and are willing to take bigger risks for it. Explosive Wins is fully compatible with mobile phones, laptops, and desktops alike, and allows people to enjoy the game whenever and wherever they want to.