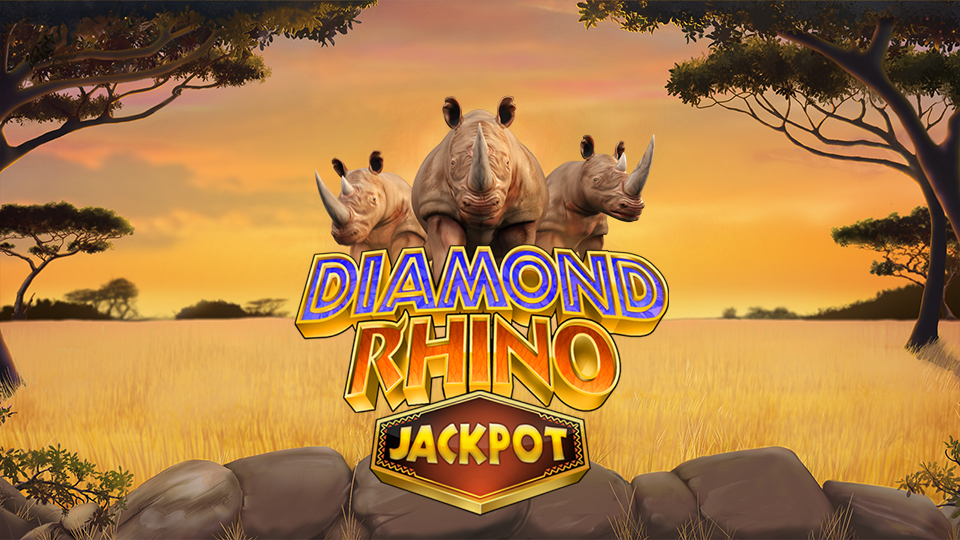 The Diamond Rhino Jackpot slot brings to screens the vibrant wildlife of Africa, taking players on a ride across the sunbaked savannas lined with tall grasses, broken only by the stupendous fauna of the continent. While the rows, 5 reels and 25 pay lines game format come across as quite conventional, it is the option of 720-win lines and appearance of reels in the shape of a diamond that adds a unique touch to the game. These reels are set against a reed-like background and display a variety of symbols in line with the theme. The highest paying symbol in the game is the elephant, rewarding 60x, 120x and 360x respectively for landing 3, 4 and 5 identical symbols in a line during a single spin.
While the game’s betting range is not that impressive from 0.25 to 2.50, and the game’s RTP is also quite low at 93.85%, Diamond Rhino Jackpot wins players over when it comes to its refreshing concept beyond the usual slot game humdrum. The max coins to be won are capped at 14,400. This makes the low volatility game best for casual players and low rollers.

Diamond Rhino Jackpot by Rival strives to offer something in the sea of online slot games hovering around similar themes and prizes. The game is based on the theme of the vibrant wildlife of Africa and takes players into the sunbaked savannas of the continent lined with tall grasses and stupendous fauna. The 3 rows, 5 reels and 25 pay lines game format are quite familiar, but the 720-win lines offered in conjunction with exciting features like Stacked Wilds, Free Spins and Progressive Jackpots makes for a fairly unique gameplay. Interestingly, the reels have designed in the shape of a diamond against a reed-like background.
Symbols on the reels are reflective of the rich diversity of African wildlife, including elephants, lions, hyenas, leopards, flamingos, meerkats, crocodiles, buffalos, and oxpeckers, complemented with low paying playing card symbols in different colors. Together with the brilliant graphics, the game offers an authentic African soundtrack and theme-inspired sound effects. The highest paying symbol in the game is the elephant, rewarding 60x, 120x and 360x respectively for landing 3, 4 and 5 identical symbols in a line during a single spin.
The special Wild symbol can substitute other regular symbols whenever it lands on the reels, besides offering multipliers of 2x, 3x and 5x on the bet if it is a part of a winning combination. It can also come stacked up to five icons high, brining even bigger rewards to players.
The Black Rhino Diamond Scatter has the ability to trigger 3, 10 and 15 Free Spins respectively for landing 3, 4 or 5 identical symbols simultaneously on the reel. Lastly, the game features a Progressive Jackpot that gets triggered whenever players land five jackpot symbols on any winning line.
Overall, Diamond Rhino Jackpot slot game by Rival makes for a fairly interesting and highly rewarding slot game with its innovative grid and 720 ways to win. While the betting range is not that broad, and the game’s RTP is also quite low at 93.85%, the max coins that can be won overall are pegged at 14,400. This makes the low volatility game best for casual players and low rollers, as well as someone looking for something refreshing out of the usual slot game humdrum.