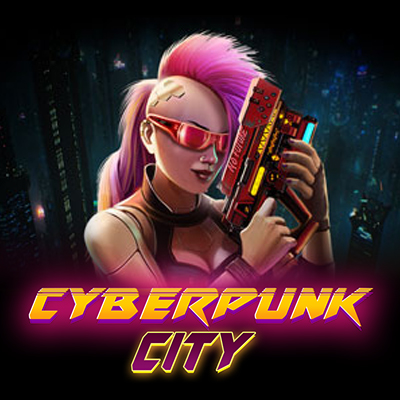 Cyberpunk City slot game by Qora borrows its theme from the fan-favorite “Blade Runner” movie, and features a dark dystopian theme for depicting the future. The dismal look of Ridley Scott’s feeble vision of the future has been aptly represented in the slot, with a backdrop hewn in constant rainfall, piles of garbage stacked here and there, and the bleak silence interrupted only by sudden neon lights.Symbols on the reels include the high-paying men with green and blue neon colors, the girl with the pink neon and the robot with the yellow neon, as well as the low paying playing card royals A, K, Q, J, 10 and 9. All these symbols have been specially crafted to match the theme of Cyberpunk City. While the game sticks to the traditional format of 3 rows and 5 reels , there are 20 fixed paylines in all that cannot be changed or played for less.
The betting range for the game is quite comfortable between $0.20 and $200 per bet. Cyberpunk City’s RTP has not been revealed yet, but there are plenty of features for players to bag huge rewards from. The Expanding Wild shirtless, eyeless Cyborg – half-man, half-machine – appears on the third reel right in the middle, substituting all regular symbols to create new winning combinations. The Random Wild man pops up from time to time, turning any of the high paying symbols into Wilds.
Whenever two special octagon-shaped symbols - Cyber and Punk - appear on reel 1 and reel 5 respectively simultaneously in a single spin, the player gets rewarded with 10 free spins, and a prize multiplier of 2x. Both symbols can be re-triggered, bringing more rewards. The highlight of the Cyberpunk City slot is its Jackpot symbol, represented a girl with a vibrant pink Mohawk. This progressive jackpot gets randomly triggered after any spin, bringing massive rewards to players from time to time.

★★★★
adam p
By Far my favorite
When you are on in this game you can win HUGE! but it can be tiring and lonesome long road of losing to find the winning road. But when you win, you can win HUGE!

Cyberpunk City slot game by Qora is based on the dystopian theme heavily inspired from the reputed “Blade Runner” movie, thus immensely enjoyable for those who love the dismal look of Ridley Scott’s feeble vision of the future. The game is set against a dark backdrop with constant rainfall and a bleak atmosphere, occasionally interrupted by sudden neon lights here and there.All the symbols on the reels have been designed to give them a very modern futuristic look, whether it is the fashion of the characters or the unique calligraphy of alphabets. There are four characters in different neon colors, of which the high to medium paying symbols are the two men with green and blue neon colors, the girl with the pink neon and the robot with the yellow neon. Cyberpunk City also has some lower paying symbols in the form of playing card Royals A, K, Q, J, 10 and 9, all of which have been designed to match the theme.
The game sticks to the traditional format of 3 rows and 5 reels and offers 20 fixed paylines. Players cannot change them and play any less lines as they go spinning, but the betting range for the game is quite comfortable between $0.20 and $200 per bet. Cyberpunk City slot game’s graphics are perfectly paired with brilliant sound effects reminiscent of the dark pulsating rave floors of the 90s.
Apart from the regular symbols, the Cyberpunk City slot also features some special symbols with bigger rewards. The Expanding Wild represented by a shirtless, eyeless Cyborg – half-man, half-machine – appears on the third reel right in the middle, and can replace any other symbol except the scatter to create new winning combinations. There is also a Random Wild feature represented by a man, and this symbol can pop up from time to time and turn any of the high paying symbols into Wilds.
Next, there are two special octagon-shaped symbols named Cyber and Punk. You would want Cyber to appear on reel 1 and Punk to appear on reel 5 together in a single spin. When this happens, the player gets rewarded with 10 free spins, together with the prize multiplier of 2x. The bet amount cannot be changed during this feature round, however both Cyber and Punk can be re-triggered, giving players another 10 Free Spins.
The highlight of the Cyberpunk City slot, however, is its Jackpot symbol, represented by the game's heroine with a vibrant pink Mohawk. This progressive jackpot can be randomly triggered after any spin and brings massive rewards to players from time to time. Though the game’s RTP remains unknown, what we do know is that with such a wide variety of highly rewarding features, and entertaining and unique premise, and brilliant game visuals the Cyberpunk City is one slot game you do not want to miss.