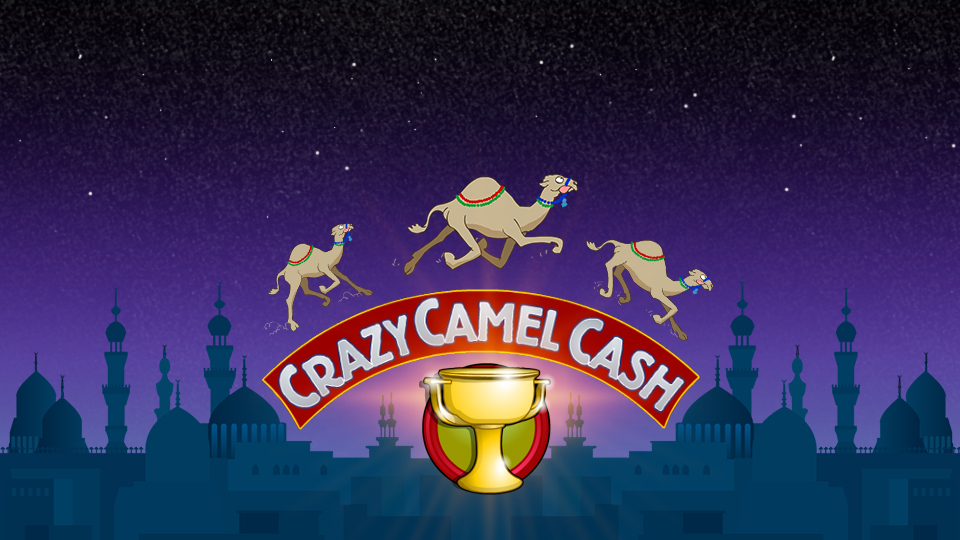 Crazy Camel Cash by Rival Gaming one-of-a-kind game with mysterious secrets leading to the highest cash awards. The game is based on the magic of the Middle East, with palm trees, floating carpets, sheikhs, and golden chalices abounding the reels. All you have to do is line up these symbols to score a win. The 3-reel slot game may come off as unusual, considering it has only one payline in the middle of the reels. It is set against a backdrop of sand pyramids under the scorching midday sun, while symbols on the other reels boast of a playful twist with vibrant and bright graphics.
The camel is one of the symbols on the reels and landing just one symbol on the winning pay line earns 6 coins, with a top payout of 2000 coins for landing three. Spinning in two camels, on the other hand, transforms them into Wilds, allowing you to create new winning combinations with whichever icon appears next. The Wild line pays three times the standard paytable value, resulting in significantly more winnings.
Other symbols include the single, double, triple, and mixed bars rewarding players with 5 to 60 coins depending on which symbols you land and in what combinations. The Magic Carpets fall next in order of ascending rewards, followed by Palm Trees and Sheikhs. The Golden Chalices are the highest paying regular symbols of all, offering up to 450 coins for landing three in a go.
One of the most remarkable features of the slot game is that there are 27 brilliant ways to stake each spin despite just a single pay line. Players can set coins and coin values from 0.01 and 30 coins a spin, which is great if you are a low or medium roller.
Crazy Camel Cash has managed to enable players to relive the beauty of classic casinos with this game, while tweaking it with some personal touches to ensure it stands out. The Middle Eastern theme already works wonders for the slot, and so do the multipe fun-themed icons. It is all about going crazy with a slot game that brings the best of entertainment and rewards under a single umbrella.

If you are looking for a hump with online casino games, we have just the right slot game for you in Crazy Camel Cash by Rival. The game brings to your screens the serenity and magic of the Middle East by depicting palm trees, flying carpets, sheikhs and golden chalices in the most elegant way on its game reels. All you have to do is line these symbols are to turn them into massive rewards. That’s not all though - the unique game offering also holds hushed up secrets to the biggest cash wins enabling players to trigger big instant prizes at command. The quirky 3-reel slot game comes with just a single pay right in the middle of the reels. The game features a backdrop of the sand pyramids under the blazing mid-day sun. Symbols and graphics have been given a fun touch, however, with vivid and colorful graphics making the entire game very eye-pleasing.
Symbols on the reels include the camel, which pays 6 coins for landing just one symbol on the winning pay line, and a top prize of 2000 coins for landing three. Spinning in two camels, on the other hand, turns them into Wilds, leading to new winning combinations with whatever icon lines up with them next. The Wild line pays out at three times the normal pay table value, bringing even greater benefits to players.
Other symbols include the single, double, triple, and mixed bars that make for wins between 5 to 60 coins. The Magic Carpets come next, followed by Palm Trees and Sheikhs. The Golden Chalices are the highest paying regular symbols of all, worth up to 450 coins.
One of the best highlights of the slot game is that though there is a single pay line, there are 27 brilliant ways to stake each spin. Players can set the coins and coin values to stretch between 0.01 and 30 coins a spin, which is fairly impressive if you are a low or medium roller.
Overall, Crazy Camel Cash slot game manages to retain some essence of the good old classic casino games that the world first fell in love, while adding its own touches and tweaks here and there to make the gameplay unique and enjoyable. The Middle Eastern theme takes the game a few notches higher, and so does the impressive array of fun-themed icons. Do allow yourself to go crazy with this slot game that brings the best of entertainment and rewards under a single roof.