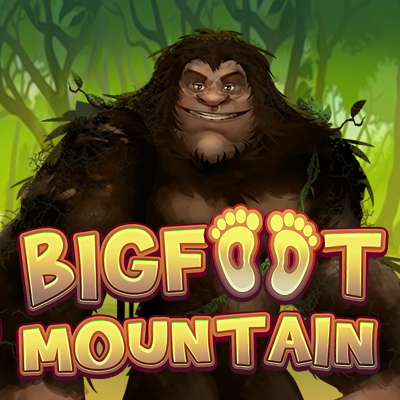 Bigfoot Mountain by Arrow’s Edge is a 4-rows, 5-reels and 75 fixed paylines online slot game that derives its unique concept from the American folklore around the giant Bigfoot that dwells mysteriously in dense forests. The game’s visuals borrow from the same legend, with a dismal-looking forest lined with bushes and trees that sway from time to time due to hidden movements. Players must spot the Bigfoot and capture his photograph lest he runs away. Symbols on this exciting game include two Explorers, the Bigfoot itself, the game logo, a pair of Binoculars, and low paying playing card icons of A, K, Q, J, 10 and 9 royals. The Wild symbol is in the form of a Polaroid that may cover the entire reel when it appears, substituting any other symbol and forming new winning combinations. The Bigfoot footprints might appear on reels 2, 3 and 4, and trigger the Big Spin feature game whenever it covers the entire reel. This feature game presents to the player a chance of spinning the Big Wheel and winning instant rewards!
Despite a low RTP of just 94.37%, Bigfoot Mountain makes for an entertaining and rewarding gameplay, thanks to its low volatility, interesting features, Progressive Jackpots that appear from time to time, and the thrilling sound and visuals.

Presented by Arrow’s Edge, Bigfoot Mountain is based on the legend of the Bigfoot according to American folklore. The 4-rows, 5-reels slot with 75 fixed paylines has a lot of fun and thrill to offer to players, who are part of a group of brave explorers in search of the giant creature – Bigfoot. With a unique concept for the gameplay, players in the game must chase the Bigfoot with their camera, and as soon as they take a photo of the elusive animal, they are in for a reward!The backdrop of the game is a dismal looking forest where the Bigfoot is hiding, with the bushes and trees standing in the way swaying from time to time and giving off hints about its location. Sometimes, an ape-like shadow can be seen passing in the distance. Add to that the thrilling effect of the dramatic soundtrack, and the entire atmosphere feels charged with suspense.
Symbols on the reels include two Explorers, the Bigfoot, Bigfoot Mountain logo, Binoculars and the low paying playing card symbols of A, K, Q, J, 10 and 9. Matching three or more symbols across a reel guarantees a win. The Wild symbol is a Polaroid which can substitute any other symbol on the reels when it appears. Whenever the Polaroid Wild appears, it can expand to cover the entire reels.
Another feature on Bigfoot Mountain is the Big Spin, where reels 2, 3 and 4 can hold Bigfoot footprints, and as soon as one reel is completely covered in footsteps, the feature gets triggered. As many footsteps on the reel, that many spins the player can get on the Big Wheel to unlock new rewards instantly. Despite a maximum exposure of 1000x the base bet, Bigfoot Mountain still makes for a highly rewarding game, thanks to its Progressive Jackpots feature. This feature can be triggered randomly on any spin, rewarding between $40,000 to $45,000.
Despite such a thrilling gameplay and premise, Bigfoot Mountain lags in terms of its RTP, which stands at just 94.37%. This is quite less compared to the industry average of 96%. However, the low volatility for lower risks, the mysterious atmosphere of the game, its bright visuals and dramatic soundtrack more than make up for this and make the game entertaining and rewarding at the same time, making Bigfoot Mountain a must for all slot lovers.