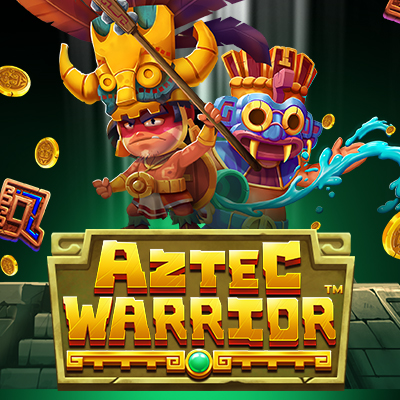 Presented by Dragon Gaming, Aztec Warrior is a 3-rows, 5-reels, 10-paylines video slot game based on the theme of the ancient and vibrant Aztec warrior tribe. With a backdrop of a lush Mexican forest, the game reels feature playing cards, masked warriors and Aztec gods Huitzilopochtli and Tlaloc for their symbols, each resonating with the historic love for art prevalent among the Aztecs.

The golden amulet symbol is the Scatter on the reels and may trigger 8, 10 or 12 Free Spins either when 3 or more symbols land simultaneously or when the Aztec warrior fires his laser beam and adds a third Scatter on the reels. A randomly picked Expanding Symbol will cover the entire reel and create new winning combinations. Another highlight is the Gamble feature, where players must choose between a red and a blue card to reveal the winner and get their wins for the spin doubled automatically.
Aztec Warrior boasts of an impressive RTP of 96.5%, besides a betting range between $0.01 and $4.00. the medium-to-high volatility game comes packed with rewarding features, brilliant graphics and an engaging soundtrack, making the game both an entertaining and fulfilling experience.

Set amidst the most vibrant characters and mythical characters you will come across in the slot gaming universe, Aztec Warrior is a 3-rows, 5-reels, traditional format game presented by Dragon Gaming, and boasts of excellent graphics and an engaging soundtrack.The game, as the name already gives out, is based on the theme of the brave and characteristic Aztec warriors of the past – a fierce tribe of warriors best remembered for smelting gold and creating beautiful art pieces. The Aztec Warrior slot resonates with the same emphasis on art, through an array of marked characters set amid a lush Mexican forest, clad in vibrant colours and exhibiting a bright symposium of artistic fervour.
Symbols on the reels draw inspiration from the ancient civilization itself. There are images of two Aztec gods – Huitzilopochtli and Tlaloc – apart from two warrior masks. The reels also feature playing card symbols of A, K, Q, J and 10 designed following the theme. The Aztec gods are the higher paying symbols on the spectrum.
Special symbols include a golden sun amulet as the Scatter, landing 3 or more of which triggers the Free Spins feature. The Aztec warrior may randomly fire his laser beam and add the third Scatter on reels 3, 4 or 5 to trigger the feature, in which players are presented with three Sun Discs. They need to pick one to reveal the number of Free Spins that they have won, which is either 8, 10 or 12. Before the round starts, anyone symbol, except the Aztec sun, gets randomly selected to act as the Special Expanding symbol.
This Expanding Symbol will expand to cover the entire reel whenever it appears, thus creating new winning combinations and bagging greater wins for players. Another interesting feature to derive maximum benefits from is the Gamble feature, which presents as an option after every winning spin. The player must pick between one of the two cards – blue and red – to guess the correct winner. If they can do so, their winnings for that spin get doubled.
All wins are paid from left to right on Aztec Warriors, starting from the leftmost reel on the slot. The mid-to-high volatility slot game offers an estimated RTP of 96.50%, which is quite impressive compared to the industry standards. With 10 fixed paylines and a spin value array between 0.01 to 4.00, the betting range on Aztec Warriors is between $0.01 and $40. The game is available in more than 50 languages and supports around 26 currencies in the present.