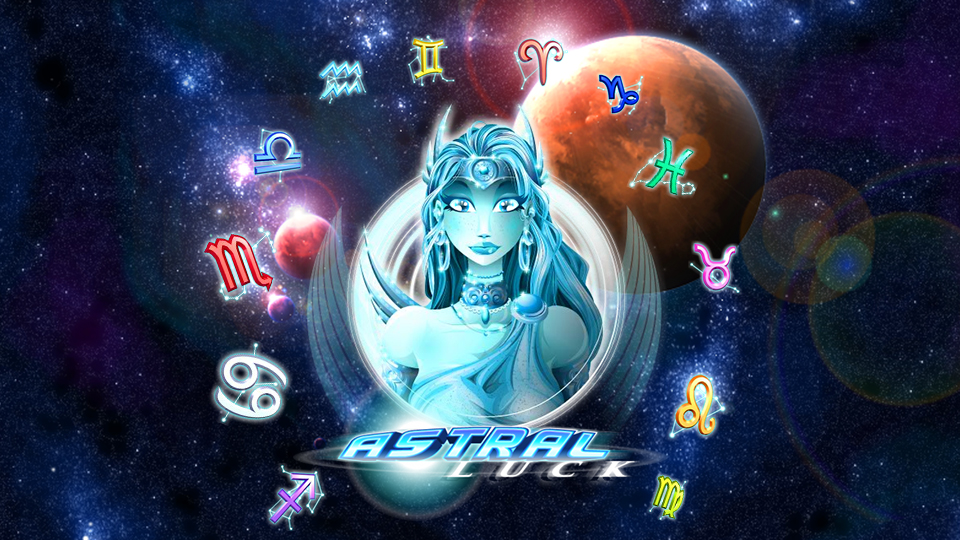 4.3 out of 5 stars.
Log in to rate the game
Your fortune is written in the stars as you enter a different spiritual realm and try your "Astral Luck" in Rival's latest 5 reel online slot machine game. The icons represented are the 12 Signs of the Zodiac. They include Aries, Taurus, Gemini, Cancer, Leo, Virgo, Libra, Scorpio, Sagittarius, Capricorn, Aquarius, and Pisces.
Three or more Pisces icons anywhere on the screen will trigger the Astral Rings Bonus Round. Win coins by spinning the Astral Rings. The payout is determined by how many symbols have matched and by the values displayed on this paytable. The Aquarius (or baby blue zig-zags) icon is Expanding wilds and will expand to fill the entire reel whenever it is possible to form new wins (Not including Scatter wins).
Expanding wilds appear only on reels 1, 3, and 5. Wild symbols will replace any other symbols to form a winning line, when possible. 3 or more free spin icons anywhere on the screen will trigger free spins.
Log in and review this game Share your thoughts with other players

Apparently, all it takes to score huge wins in a slot game is luck. What better way, then, to relish in huge rewards and plentiful features than trying out Rival’s refreshing Astral Luck slot game to try the best of your fate? The game has been designed to depict a mesmerizing backdrop under a starlit sky with mysterious revolving circles designating the journey into a parallel dimension. Symbols on the reels are in the form of letters in entirely different languages than we understand, though they do convey the one thing players are looking for - big rewards. There are also tons of exciting features to play with including expanding wild, juicy jackpot, free spins, and the astral ring bonus round. Players are free to choose 2000 coin, coin value and line combinations to reduce or increase their stake according to their pocket size.
Some symbols on the reel are actually familiar such as the Pi, while some have been encrypted enough sort of alien language. Landing 3 to 5 of these symbols on an active pay line will unlock prices, the most valuable reward being 1000 coins for landing five strange red symbols resembling an M.
The Wilds appear only on reels 1, 3 and 5, and can expand to cover the entire reel whenever they appear, substituting other game symbols to create new winning combinations. This is followed by five exclusive jackpot symbols, spinning which can earn you a maximum of 7500 coins. This is accompanied by some mysterious bonus symbols, landing at least three of which activate the Astral Rings Bonus round. Here, players must spin the Astral Rings before them. The two symbols that align in the designated sections at the top of these rings will reveal your prize.
Finally, the game also has a Free Spins bonus that gets activated whenever players land 3 or more symbols. 3 symbols trigger 5 free spins, while 4 or 5 will reward players with 10 and 20 free games respectively. During this round, all prizes get automatically tripled. There are 2,000 different ways to wager each spin of the reels with 50 line options, 10 coin options, and 4 coin-value options. Simply select your lines, coins, and coin values to play for stakes ranging from 0.01 to 125 coins every spin.